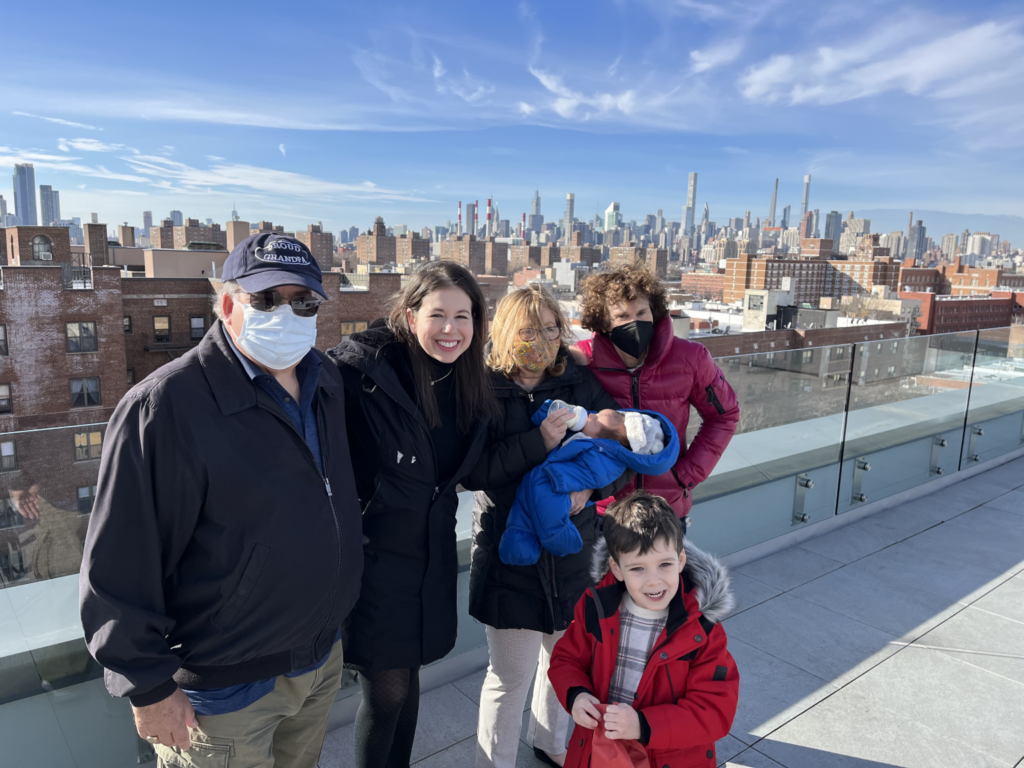 What does a couple do during the pandemic that is raging in NYC? Go to the roof garden of their Astoria apartment house with an amazing view for a baby naming ceremony. The attendees were her parents, their son, her sister on zoom, and me in the cranberry ski jacket.

We had a family kiddish cup and I prepared a loving service inclusive of songs at the beginning and end. The mother explained the baby’s name, which linked him with deceased relatives. It was one of the most heartfelt baby naming officiating I have done in my career.

When life serves you lemons, of course, make lemonade. 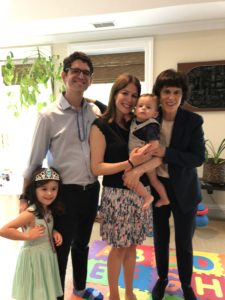 Over many years this family and I got together as friends. Incredible to see the kids grow. The other magical thing is I see the grandparents, friends of theirs, and extended family. They have welcomed me into their clan, and I am blessed. 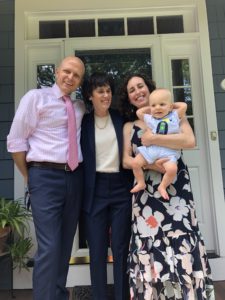 A couple called me Mother’s Day weekend this year to ask me to officiate their son’s naming. The rabbi who had been engaged to do the event disappeared on the couple and with invites out and date set they were looking for help.

I told them I was free on the June date, and we proceeded to have Facetime calls. The baby was named for the grandfather who had passed away within the year. We scripted a service and I drove out to a lovely suburban New Jersey town where family and friends gathered.

It was so warm and low key- service in the living room, brunch buffet in the open kitchen and seating on the patio. Add to it a beautiful June day and a smiling baby boy and it added up to a wonderful event.

One of the first weddings I facilitated, over six years ago, occurred on the Jewish holiday of Purim, a joyous and festive one.  The couple had met on Purim and wanted their wedding in Manhattan to be an outdoor rooftop celebration.  I worked with them for a few months leading up to  the affair and we grew to become great friends.  The wedding was wonderfully spirited and full of life.

Fast forward, six years, and they had moved from East Village to Long Island City to New Rochelle.  They now had an almost two-year-old daughter.  They wanted a baby naming ceremony for her and of course it had to be on Purim, which was March 12th of this year.
We all gathered in their living room and I saw the family I had met six years earlier.  The little girl was happy to join in the songs and listen to her Hebrew name. We all said the prayers together. 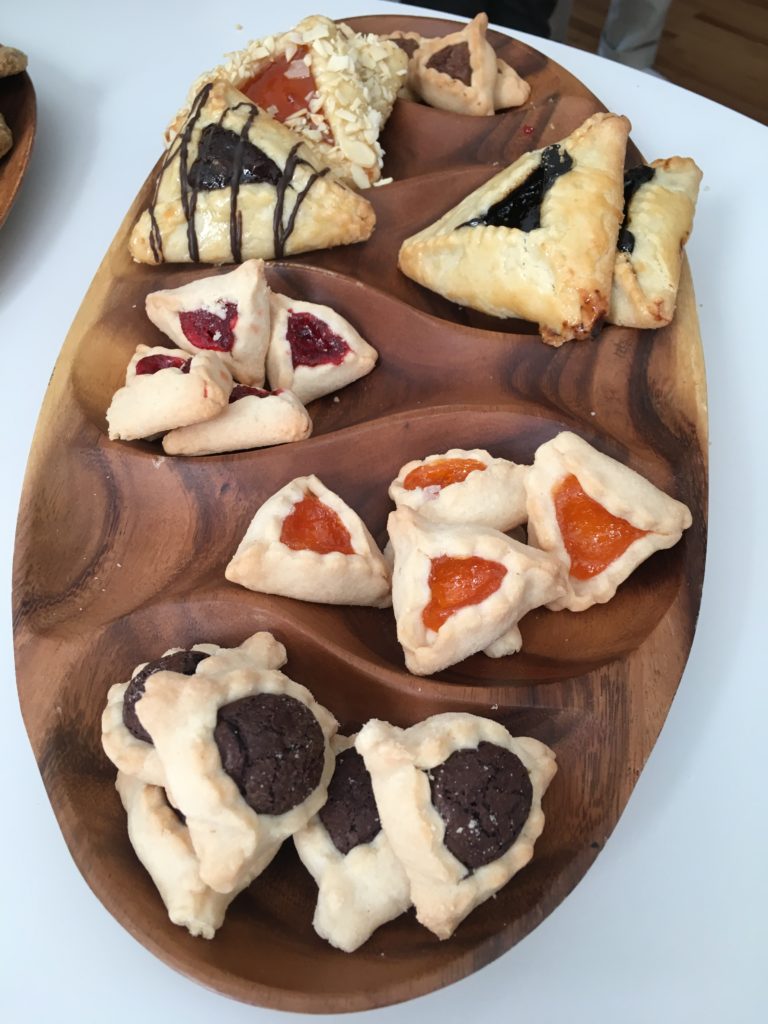 Of course, a wonderful part of the holiday involves eating hamantaschen, pictured here.  We enjoyed delicious pastries in the shape of a  three-cornered hat.  That was the hat of Hamen, the villian of this story, who wanted to destroy the Jews.  The heroine was Queen Esther, who appealed to the King to save her people, and prevailed. 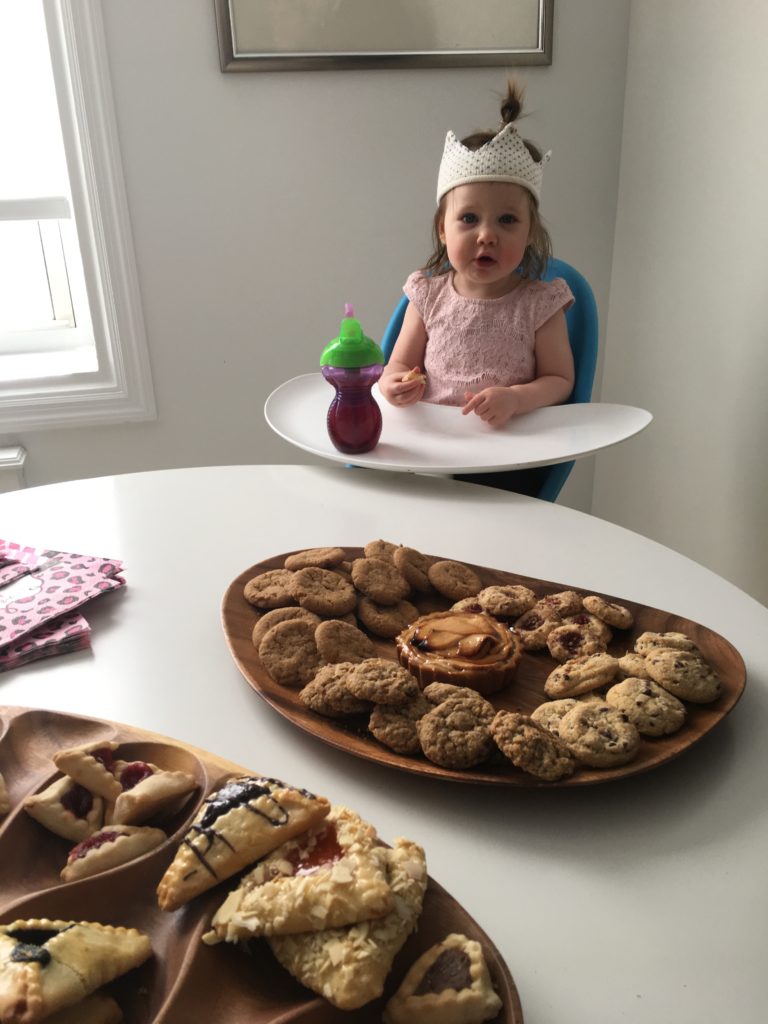 Witness the crown on the little girl who represents our modern day Esther, growing up to be a strong  woman.
How lucky I was to share this Purim Babynaming and holiday with old friends and bring a little girl into the Jewish world. 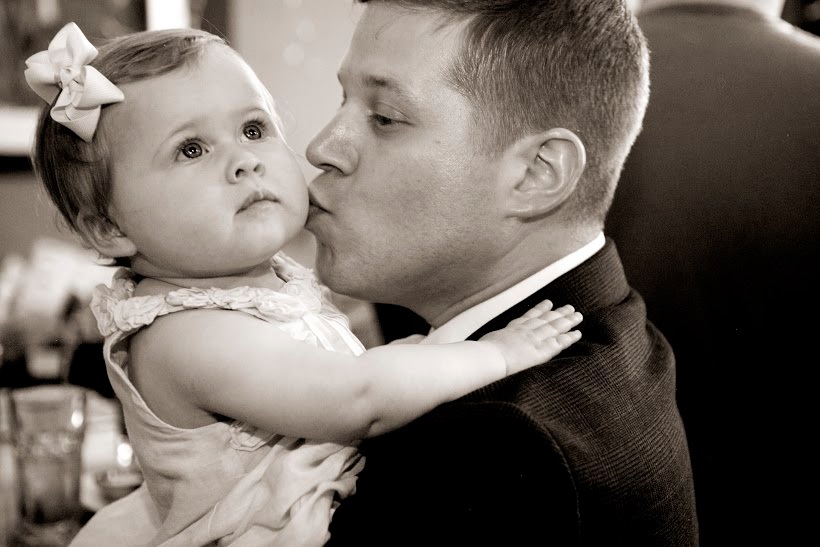 A couple called me to officiate the baby naming of their daughter who was celebrating her first birthday as well.  They lived in Brooklyn and selected a Russian bar named Karloff in Cobble Hill for an afternoon ceremony.   I met with them at their apartment and stayed to see them feed Eve, the baby.   She was an adorable little girl who loved the healthy vegetable puree her mother had prepared.

I learned some of the people for whom she was named were great grandmothers who had suffered many hardships and for whom family closeness was paramount.  One was the family matriarch who worked in a sweatshop on the Lower east side and was a player in the Yiddish theater.   They chose the name Eve for its simplicity and power.  The first woman on the earth and the one who gives life to all.  Her middle name was chosen in honor of her grandfather Howard who was a man with a ready smile and sense of adventure.  They already see evidence of these traits in Eve.

It was a warm and loving ceremony with all family members participating.  Rob, the father of the baby, used the tallit from his bar mitzvah.  A kiddish cup was used from a family wedding as well.  And they used an old Hasidic tradition at the end of the ceremony.  Family and friends were supposed to shower the child with candy and other sweets to symbolize their wishes that both the child and parents have a sweet life.   So, all who attended received a little bag of candy to take home.

The Brooklyn bar setting at Karloff’s was intimate and contemporary at the same time.  The bar was beautiful and the waiters and waitresses accommodating.  Lunch was served with drinks, of course, and everyone was so relaxed and welcoming.  This may be setting a great trend as Brooklyn is now doing in food and community.

Thanks to Michelle Murray, photograher. 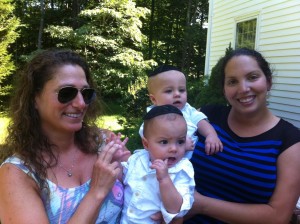 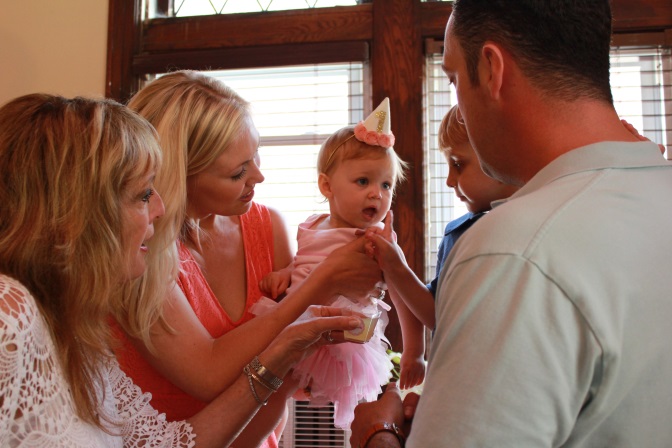 A couple called me, last winter, to plan a baby naming for their beautiful, one-year-old daughter, Ava.   The mother hailed from sunny California and had converted to Judaism.  Her husband had been raised in a Jewish home and wanted to perpetuate the religion for his kids.
We met at my apartment in NYC and I learned about their lives, past and present, as parents. He lived within ten minutes of his job and could come home for lunch to be with his kids.  A true modem father.   She seemed to handle both children effortlessly in a laid-back, warm, and empowering manner. 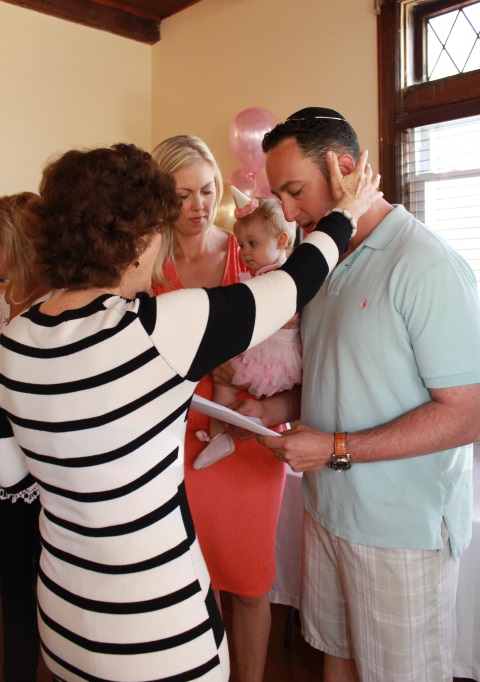 The service included the grandparents reciting short prayers and lovely blessings. I led  a group of 40 people present in their living room in Hine Ma Tov . The English translation is  “How good and pleasing if people could sit together in unity.”  We joined hands and all sang it together.
I explained that naming is a way the Jewish people have of linking the past,, present, and future, as a name of the child is taken from a deceased relative.  It is the true realization of L’Dor va ‘Dor, which means “From generation to generation.” 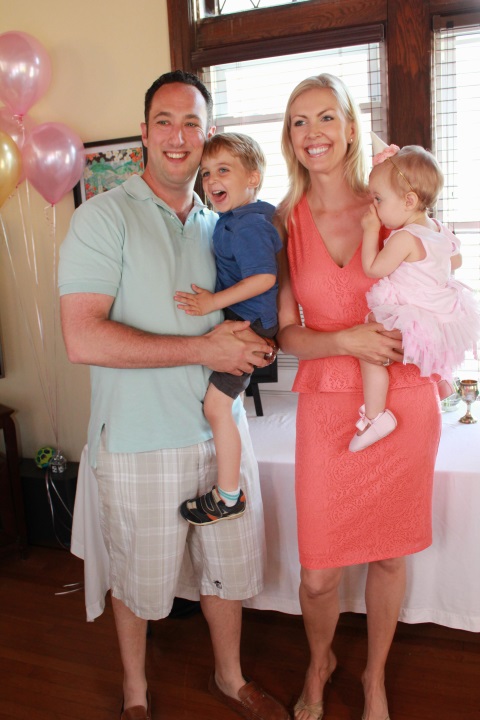 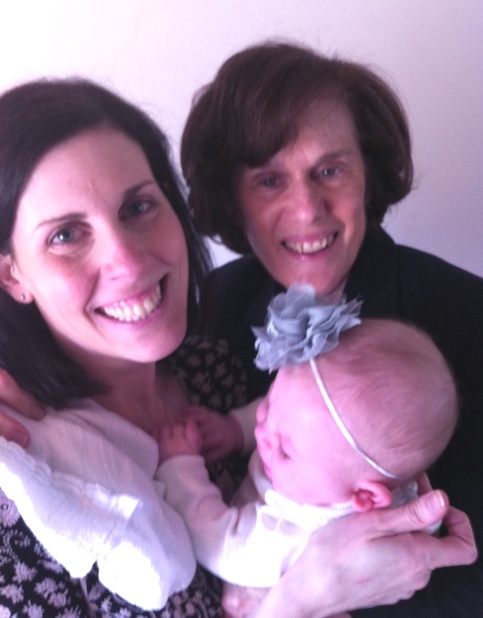 I love to see my brides and grooms having children!

I  officiated at the interfaith wedding, two years ago, of two lawyers. One was brought up Catholic, the other one Jewish.   I co-officiated with a wonderful Catholic priest, Father Tom who had been the family priest.  We worked on the service with the bride and groom and it was warm, witty and personal.   Even the day’s weather cooperated at sunset on a rooftop in Tribeca.  I got to know both sets of parents and felt that the families welcomed me into the event.

How amazing it was when I received the email from the bride that she had a little girl some months back and wanted me  to do a baby-naming ceremony  with the priest.   It was Father Tom and I again at a historic building in Park Slope this winter.  We had the opportunity to plan an interfaith baby-naming and it was my first one.   I visited the couple who lived in a  former church converted into a condo in Brooklyn.  The sun through the stain glass windows and the soaring ceilings made it a  magical  place.  They had much input deciding to do blessings themselves and give honors to their parents and grandparents.  Tom and I filled in the blanks with prayers and blessings ourselves. The ceremony was enjoyed by Emily their daughter of seven months. She didn’t cry through the whole thing, so I guess we did something right.

I find myself fortunate to connect with my past brides and grooms and  be at these wonderful events of the next generation they have produced.  The fact that another officiant can work with me to produce a spiritual inclusive service is something  I am proud of. 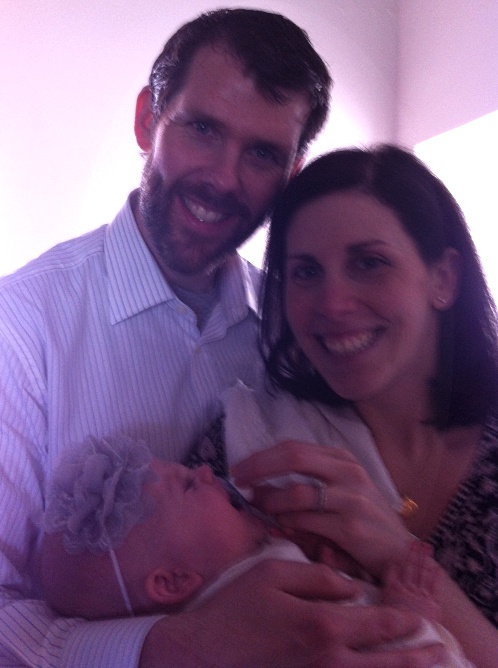