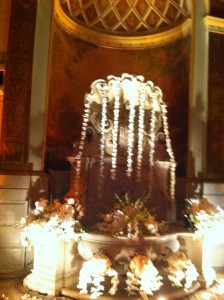 I was on the ferry from Montauk,  New York to Block Island, Rhode Island two months ago when a call came into my cell.  A pleasant male voice asked if I was Rabbi Gloria and then proceeded to tell me his interfaith wedding ceremony, planned for just a few short weeks away, was “rabbi-less.”  There was a problem with the rabbi they had formally chosen and they were in need a of substitute to co-officiate. Being free on the date of their marriage, I asked the venue. “The Plaza Hotel in New York City,” he replied, “With about 275 people coming in attendance.”
Fast forward a week: I met with the couple and their friend Wesley who was a Universalist Minister and was to co-officiate. The four of us created a beautiful service and both the bride and Wesley, who were from Taiwan, expressed interest in learning more about Judaism. 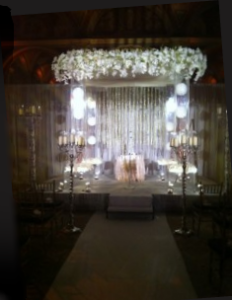 I was unprepared for just how intimidating the Plaza Hotel ballroom, where I was to officiate, can be.  It was a product of the early part of the 1900s, with soaring ceilings, beautiful woodwork, detailing and amazing balconies.  The decorations for the wedding were incredible.  Candles everywhere, flowers overflowing and lights illuminating the gold fixtures.  The chupah was located on the stage, and we rehearsed as if it were a Broadway production.  Lights, audio, video; I truly felt like I was beginning my theatrical career.
But then the moment came: the bride and groom were in front of me – a drop-dead gorgeous woman and her handsome groom.  Their warmth and love for one another was so apparent.  I concentrated on the spiritual service at hand and felt gratitude that I had been selected to lead this service in such a historic, elegant and magnificent setting.
Previous Post: « A Jewish Interfaith Wedding with a South American Feel
Next Post: A Rabbi and a Priest Co-officiate in Basking Ridge, N.J. »