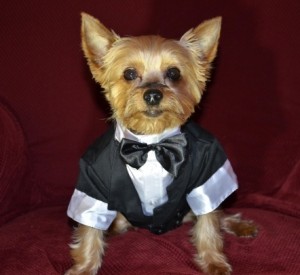 A couple who had been living together for 12 years decided to get married on 11/11/11. The groom hailed from Dominican Republic and was a tall, good looking, sweet man who loved animals and was working at a Pet Spa. His wife-to-be organized a non-profit shelter for dogs and was passionate about adoption of these animals. Between the couple and the bride’s parents they owned 7 dogs.

I arrived at a lovely penthouse apartment on the west side of New York City the day of the marriage to find all the dogs in attendance. They were properly dressed in pearls and bow ties and ready for the wedding to begin.

A few friends were in attendance but for the most part it was family. I used my husband’s tallit that he brought from Israel as the Chuppah and both sets of parents and some dogs were under it. The bride used a simple gold band that her father gave her mother 40 years before that he bought for $15 as they had no money at that time.

The largely Jewish service included blessings from the parents and barks from the dogs. At the end the groom broke the glass and we all had some snacks (not doggy ones) on a beautifully set table.