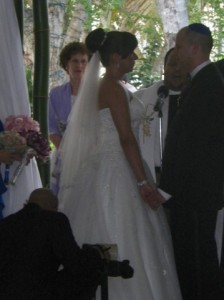 This spring I flew down to Puerto Rico to co-officate the wedding ceremony of a woman who met her man at Duke University 9 years ago.  She was from a small town in Puerto Rico, raised Catholic and ended up being a brililant geneticist with a PhD.  She met her husband to be at graduate school at Duke where he was going to law school.  He was from a conservative Jewish home with a father who was raised Orthodox.  During those 9 years they were apart a good amount as he was working in South America,  and he learned Spanish as well as Portugese.  They decided to marry and do the destination wedding so that her family could all attend. 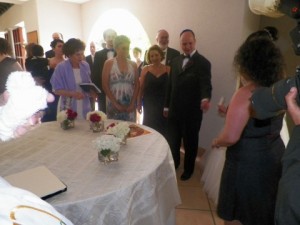 The priest that they selected was originally born in the Bronx and came to Puerto Rico when he was seven years old.  He was warm and welcoming and his first words to the congregation unsolicited by me were “Shabbat Shalom”   And then he proceeded to explain the meaning of the word Shalom to those in the audience that were not familiar with it.  With the couple’s help he put together a program of the service in Spanish, English and then i added the Hebrew.  So we were officiating in three languages.

When it came time for the Kiddish prayer he handed me the kiddish cup without my asking him and made it seem as natural as if he was conducting mass.  I said a few words about him and his congregation and we worked together on the blessings and the readings.  At the end of the service we embraced the couple and each other and i stayed a while to speak to him about his parrish and his work.  It was wonderful how seamless the service was and how whatever rituals and prayers we did from both religions flowed naturally.

Previous Post: « Central Park Wedding in Bloom: Rabbi Gloria Officiates An Interfaith Marriage
Next Post: Off to the Races at a Saratoga Wedding »